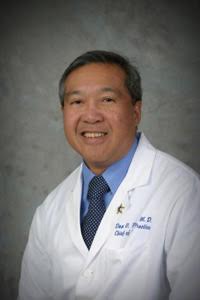 For well over 30 years Don V. Parazo, M.D. has dedicated his life to serving the healthcare needs of individuals as well as entire communities. Dr. Parazo’s commitment to excellence in the practice of medicine is evident in his role as a Board Certified Gerontologist and Board Certified Family Practitioner, as well as in the numerous leadership positions he holds at High Desert Medical Group and throughout Southern California.

Dr. Parazo earned his medical degree from Texas Tech University School of Medicine in Lubbock, Texas and performed his family practice residency at R.E. Thomason General Hospital in El Paso. When he completed medical school, Dr. Parazo was awarded a naval Health Professions scholarship. He then went on to serve our country in the U.S. Military where he held the position of Chief of Family Practice at El Toro MCAS in Santa Ana, California. At that time he also maintained a Family Practice office at Long Beach Naval Hospital. When he left the Navy, Dr. Parazo had reached the rank of Lieutenant Commander.

Following an exemplary career in the U.S. Navy, Dr. Parazo shared his medical acumen with students at the Glendale Adventist Family Practice Residency Program, where twice he received the Clinical Teaching Award given to him by the staff.

Within the Antelope Valley community, Dr. Parazo is well known and respected as a publically elected official on the Board of Directors for Antelope Valley Hospital District. In his many years as a Board Member, Dr. Parazo held the position of Chairman for three of those years and currently serves as the Board’s first Vice President. While serving on the AVHD Board in 2006, Dr. Parazo was awarded Trustee of the Year by the Association of California Health Care Districts. Shortly thereafter, Dr. Parazo was asked to join ACHD’s Board of Directors, where he currently serves as Finance Committee Chairman and Treasurer. In this capacity, Dr. Parazo is part of the Core Group for the District Hospital Leadership Forum, addressing the needs of California District Hospitals.

Dr. Parazo continues to have a positive impact on the health of Antelope Valley residents in his participation as a member of the Hispanic Chamber of Commerce and the Antelope Valley Partners for Health–Community Healthcare Panel. Likewise, his concern for bridging the gaps in healthcare is illustrated by a keynote speech he gave at UC Davis in 2008 on “Cultural Differences”.