Los Angeles, CA, April X, 2021 — CASA of Los Angeles has appointed Charity Chandler-Cole as the organization’s new CEO. Chandler-Cole takes over after four years of leadership and growth under Wende Julien, and brings a new dynamic to the organization. With her direct experience as a former foster youth in LA County, and unique perspective as CASA/LA’s first Black CEO, Chandler-Cole will be able to build upon CASA/LA’s programmatic initiatives and commitment to addressing racial injustice in foster care.

“Charity is the right leader at the perfect time for CASA/LA,” said Congresswoman Karen Bass (CA 37th District). “Charity’s leadership and communications skills coupled with her background and life experiences will help CASA/LA develop strategic alliances. As a woman of color who was in the foster care system herself, she is very sensitive to the needs of those who are disenfranchised, people of color, and those impacted by the foster care system. She is a visionary, who will be a tireless champion for the program and the children and families they serve.”

Charity Chandler-Cole leaves her role as National Director, Contracts Administration with the AIDS Healthcare Foundation, where she began in 2015 and oversaw a budget of $30M. She also will pivot from her position as CEO of Transformative Management Solutions (TMS), a consultancy Chandler-Cole founded that is focused on aiding nonprofit, public and political organizations in implementing social, educational and racial justice as well as child welfare initiatives.

“Having been in the system and seeing the dire outcomes for so many children who feel they have no voice and no one who cares for them, I was drawn to CASA/LA,” said CASA/LA CEO Charity Chandler-Cole. “CASA/LA provides a direct way to change outcomes that so often seem automated in an overburdened system. A CASA volunteer sends a distinct message, letting everyone that interacts with that child know that they have someone looking out for them. These children are not alone, and they will not be discarded. CASA/LA has the opportunity to upend the status quo of our child welfare system and serve as a transformative force in drastically changing the experience of youth in foster care.”

In addition to her impressive professional background, Chandler-Cole also sits on several highly impactful committee boards, including her position of Chairwoman of the Board for the Anti-Recidivism Coalition and Commissioner for LA County Children & Families where she is also Co-Chair of its Racial Justice Committee.

One of Chandler-Cole’s initial goals for the organization is to pursue more active volunteers who align with the experiential backgrounds of the children and communities CASA/LA serves.

“We have the opportunity to become more culturally relevant in our communities and in how we approach children,” said Chandler-Cole. “I would like to see CASA/LA train more volunteers who have experienced some of the life that these children have, who have known trauma or poverty and who can be an inspiration that success is possible. All kids in foster care are not a monolithic block, nor are all black children, hispanic children, etc. We have to treat them differently per their experiences, challenges, and connect with them on a relevant level.”

CASA of Los Angeles (www.casala.org) is a community-supported 501(c)(3) non-profit organization of dedicated staff and volunteers working one-on-one with children in LA County’s child welfare system who have experienced abuse or neglect. CASA volunteers, or Court Appointed Special Advocates, work one-on-one with a child in foster care to form a trusting relationship, giving that child a stable adult or someone who cares who can advocate for their best interest. CASA volunteers help children in important ways such as comforting them through emotional trauma and transition, arranging for needed healthcare, social services or enrichment activities, talking with teachers to ensure educational services are in place and reporting to the children’s court and judges by attending court hearings and advocating for the childs welfare. CASA/LA is among the largest of regional programs in a national and state-wide volunteer network serving children in foster care. Studies have shown that children with CASA volunteers receive more assistance and support than children without, and are more likely to be adopted or returned to their families and less likely to reenter the child welfare system. For more information, please visit the CASA of Los Angeles website: https://www.casala.org. 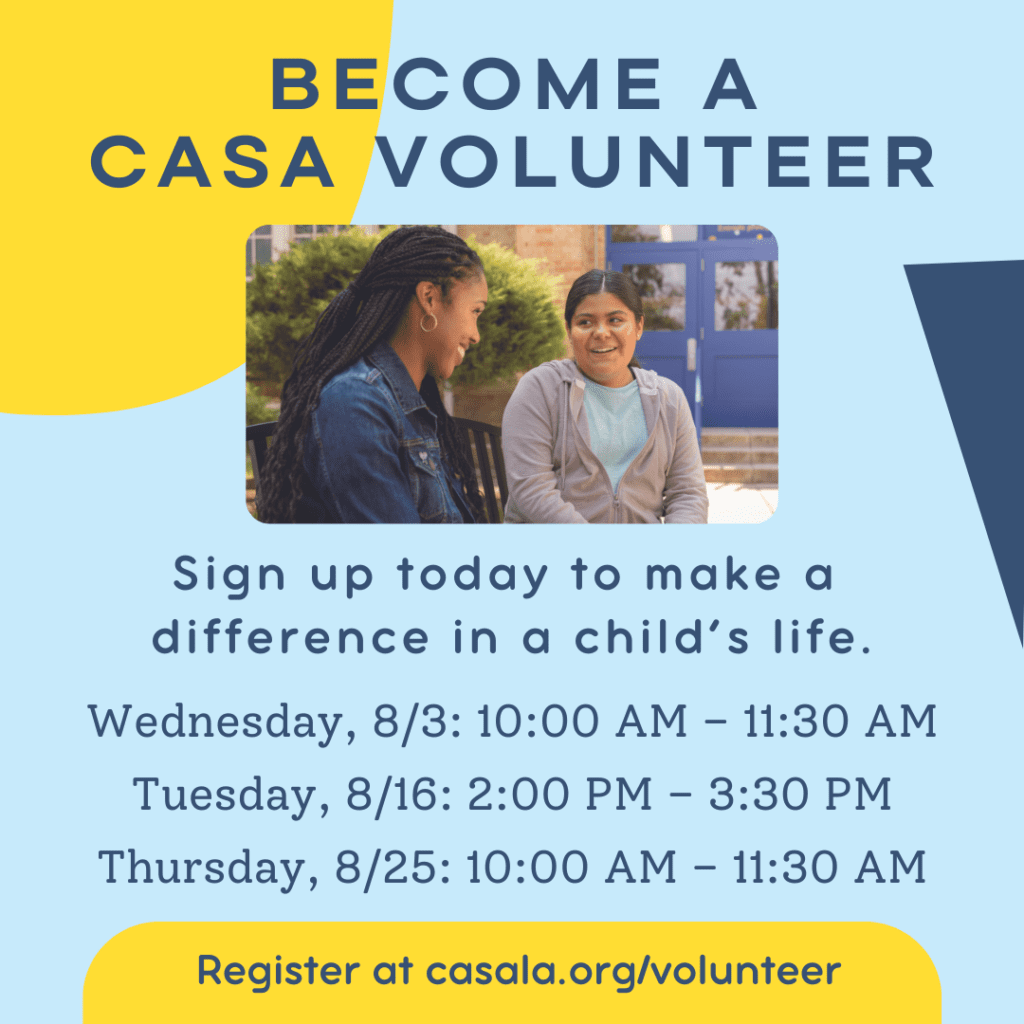